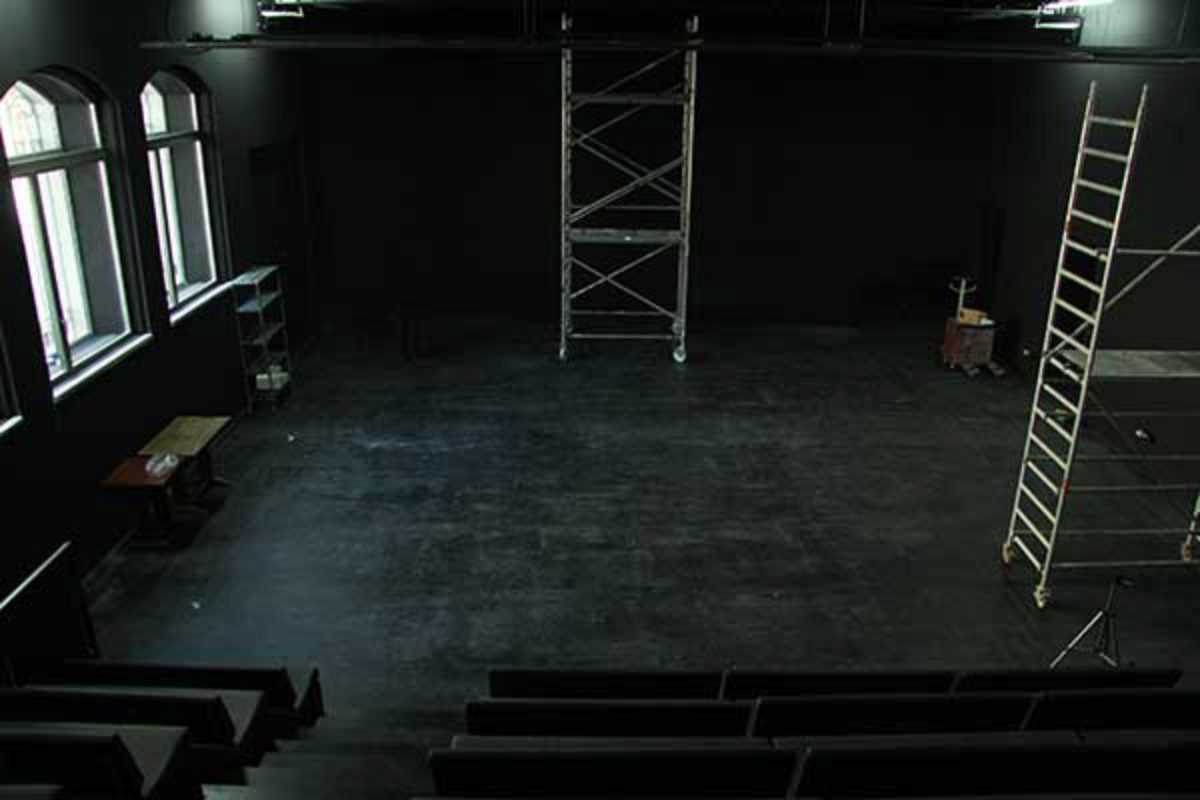 Walking along Vilà i Vilà, unaware of the independent art space, you won’t come across a theater like those neighboring on Paral·lel. There is no marquee, no flashing lights, no box office. Only a singular sign above an otherwise inconspicuous entrance. “Hiroshima” it reads in a strong, sober typeface. Inside, the space expands. Formerly an old elevator factory, the 850 m2 Hiroshima comprises three areas: Sala Negra (dance and performance), Sala 2 (live music) and the bar.

The program places emphasis on movement or dramaturgy, but if technology features prominently in Hiroshima’s lineup, it is to illustrate the overlooked relevance of performance in digital times. “We need to incorporate technology in order to capture audiences.” explains artistic director Gastón Core. There is a notion that “theater is boring.” But Hiroshima can help change that by bringing to the stage a more creative, curious and contemporary vibe, while resurrecting the sense of celebration that surrounded theater in decades past.

The space and its acts are received by an impressive cocktail locals and expats from different circles and age groups, making it hard to stereotype what particular crowd the place is catering to. And that’s a good thing. Foreigners comprise one out of six Barcelona residents, a statistic that doesn’t take into account the city’s tourism. Establishing creative spaces with multicultural atmospheres not only produces a more inclusive experience for foreign audiences, but also helps to propel the cultured tourism Barcelona has long clamored for. Visitors immersed in things like bionic movement research are not the type to sit shirtless on a train, sangria in hand.

Hiroshima’s artists represent a wide range of nationalities. While home-grown acts dominate the lineup, the inclusion of artists from different continents reflects an openness to diverse influences and perspectives. The consideration for ethnicity also places an emphasis on personality. These are not disposable actors filling roles but individuals with personal qualities incorporated into their craft. Core himself is an artist with multi-cultural roots. Born in Buenos Aires, Core studied theater and dramaturgy in Catalunya and later founded the Barcelona-based dance company La Zoológica. Hiroshima’s founder too was a dancer back in the late ‘70s; at present she prefers to remain anonymous.

Movement is a recurring theme. The layout of the space allows fluidity between the salas and the bar, although each have their own independent areas and access doors. The timing of the inauguration back in 2015 too could be likened to a lunge: a bold move forward against the lingering effects of the crisis. “It’s the perfect time to take risks,” says Core, and indeed, this attitude carries through to the acts, the website, the branding. Even the name is provocative. Core explains that “Hiroshima” symbolizes rebuilding. While the Japanese city may still be associated with wartime horrors, it has also long ago been rebuilt and proclaimed a city of peace, hosting international conferences and delighting with baseball games, hot springs, sake and Michelin stars.

As a name, “Hiroshima” might raise some eyebrows. As an entity able to sustain audiences, it may conjure doubts. But well, unconventional things often do.